A Year in Paradise – Life in the Middle of Nowhere

Moving to Lapland was a jump into the unknown, but luckily I ended up jumping into some kind of a fairytale land. Or at least that’s how I sometimes feel like.

My Dream of Lapland: a Year in the Magical North

I always had this dream that one day I’d move to Lapland and live there for a while, just like my father did in his youth. He used to tell me such lovely stories of those times, of his adventures in a magical land far far away. Little by little Lapland started calling to me. I knew I had to go there, this time not just for a holiday, but to experience Lapland properly.

I am originally from Sysmä, Southern Finland, but I’ve spent the last few years studying in Helsinki. Last year I finished my studies and thought the time had come. Now I’d go to Lapland, to seek my own adventures and stories in the far north. So, I got a job in Salla, a little town with a slogan of “Salla – in the middle of nowhere“. After five busy years in a busy town it sounded quite heavenly to me. 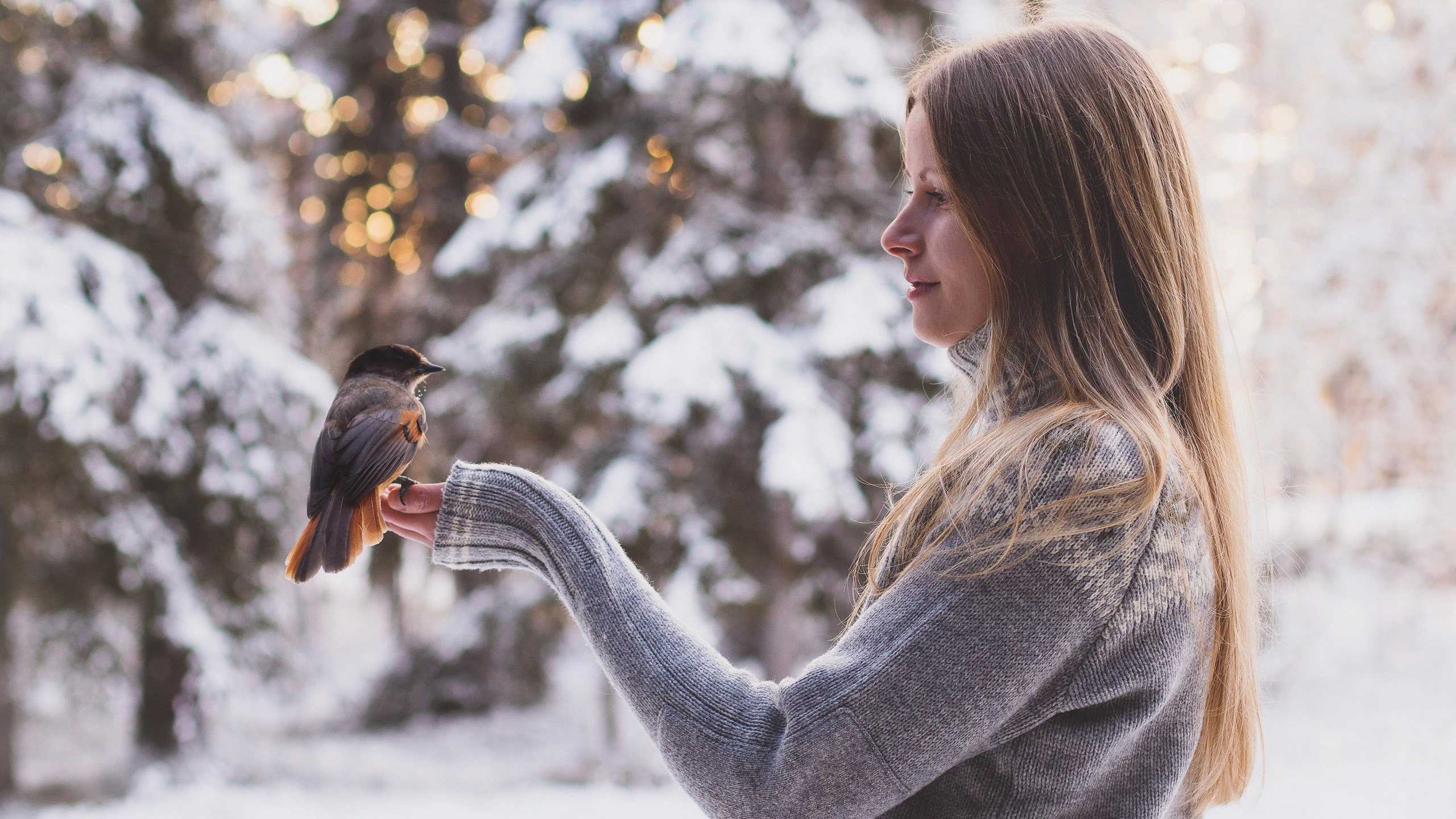 Moving to the other end of Finland by myself was not only exciting, but also a little scary. To be honest I was quite terrified in the beginning. But after the first days it got easier, I started to feel at home. I’ve been in Lapland for seven months now, and every day I think how thankful I am to be here: that I got the opportunity to fulfill my dream, but also that I was brave enough to reach for it. 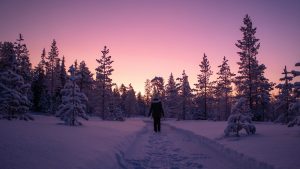 The best thing about living in Lapland is that even everyday life seems to be full of wonders here. I can climb up a fell (an arctic mountain) on a normal weekday after work, as there are two fells right next to my house. I have friendly Siberian jays in my garden, and I’ve also seen an eagle fly right above my house.

Even my ten-minute drive to work and back home often takes my breath away: when it’s snowy and everything turns beautifully blue, or when the sun is just going down behind a big marshland, and the fells on the other side are glowing in pink.

It has been a wonderful, beautiful and exciting adventure so far, and there has not been a day that I would have regretted coming here.

Land of the fells

Anyone who’s ever climbed up a fell knows how charming these big, handsome giants are. They make you feel like you’re standing at the edge of the world, or maybe even that you’ve entered a whole other universe. They make you feel small. Fells enchanted me ever since I first saw one, but it wasn’t until here in Salla that I truly fell in love with fells. Now I learned to know them better. I’ve seen fells in all their moods: calm, gentle, warm and full of sunshine, but also fierce, windy, cold and foggy. And actually I like both sides. Being moody is a part of their charm, and the wind howling at the peak is now one of my favourite sounds in the world. 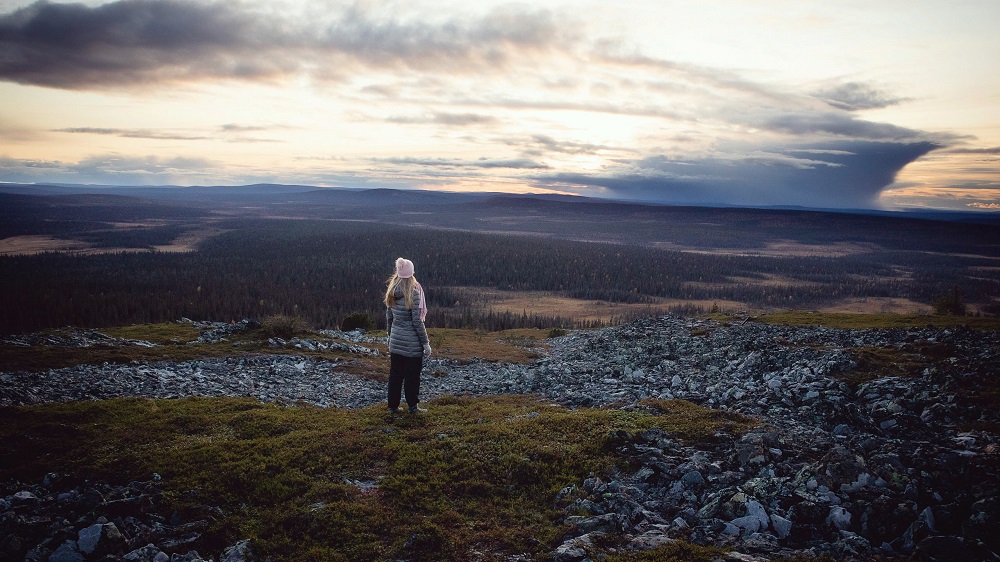 After moving to Lapland I’ve also met fells like I had never met before: ones that don’t have paths or any other landmarks made by man. They’re wild, untamed. It is quite a feeling to stand on top of a fell like that, no other people in sight. It’s just you, the fell and wilderness all around you. For example the Tuntsa area in Northern Salla is a good place to go if you want to get a fell all to yourself.

Siberian jays are common birds in Lapland, and they’re famous for their friendliness towards wanderers. In the old days Siberian jays were believed to carry the souls of huntsmen who had passed away, and they’re also known as good-luck birds. If you treat them well, they will bring you good fortune. There are many legends of Siberian jays leading lost people out of the woods or gold miners to the best gold mines. Last autumn I got a little bit lost in the forest myself, when I was coming back from one of those pathless fells. Then a Siberian jay appeared out of nowhere and led me back to the woods that I recognized. I couldn’t help but think that maybe those old stories were true after all… 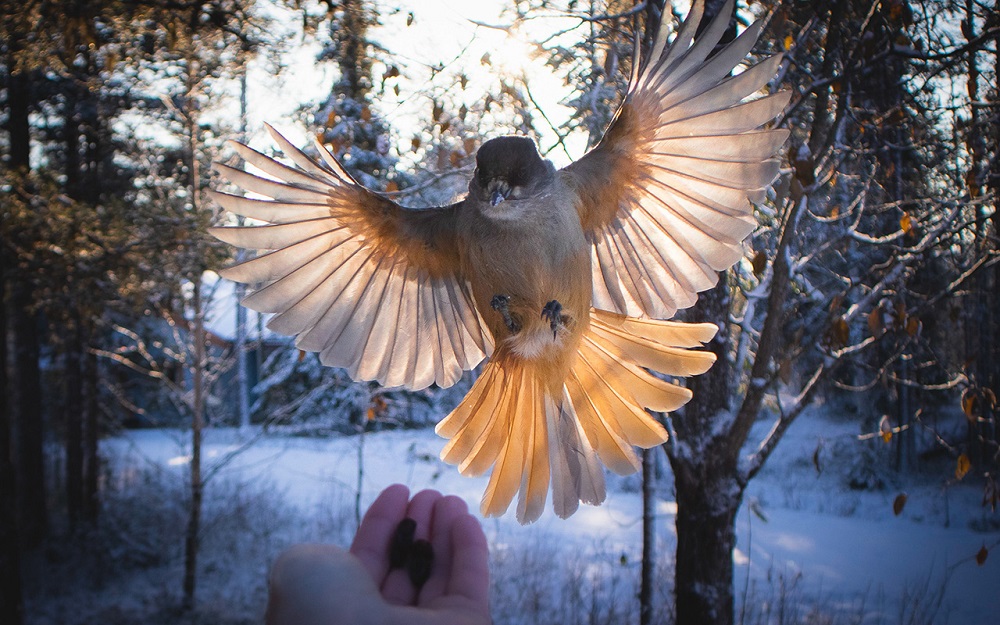 Siberian jays have become very dear birds to me, and not only because they once saved me when I got lost. They often keep me company when I stop to have a snack at the campfire place on a hike or on a skiing trip. But most of all, I have become fond of “my own” Siberian jays that live in the woods around my house. At first they were shy, as no one had tamed them yet. Little by little we got to know each other, I brought them some raisins and slowly gained their trust. Now those Siberian jays come and sit in a tree behind my window, waiting for me, and asking for some treats. It’s really hard to tell them no, so I usually take raisins with me and go out to feed them. I may have tamed these Siberian jays, but at the same time they have tamed me.

The magic of the eight seasons

Originally I was supposed to work in Lapland for seven months, but I liked it here so much that I decided to stay for a whole year. I want to go through all the seasons, I thought. They say there are eight of them in Lapland, and every one of them is beautiful in its own way.

I came to Salla in August, so I got to experience the end of the summer, the season of the delicious wild berries. Then came the gorgeous autumn with flaming colours, and winter began already in October. Salla is located just above the Arctic Circle, so there’s no official polar night, but in November and December you have to climb up a fell to see the sun. The days were short, but then again, we had snow, so the dark time of the year didn’t feel as dark as it does in the rainy, Southern Finland. 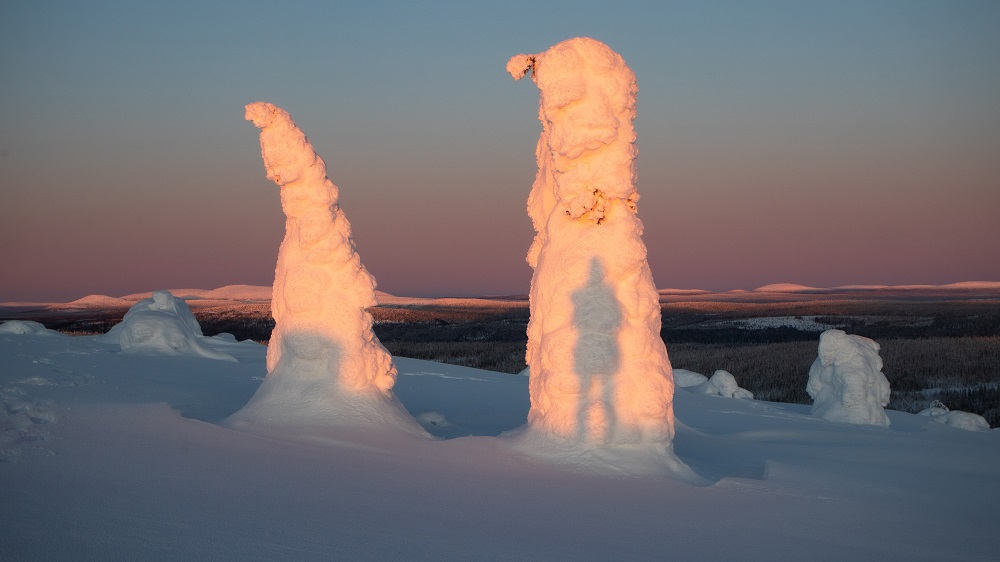 Midwinter had some beautiful, freezing cold days when the whole world turned pink and purple at dawn. I had never seen a sunrise like that before. Now we’re moving on into the lovely spring-winter. Days are already quite long, and we’ve had lots of clear, sunny days, but also clear nights with starry skies and northern lights. This winter has been really snowy and there’s one metre of snow at the moment, so I guess it will take some time before the spring gets here. But it will come, in time, and I bet it will feel wonderful after a long winter. Then we’ll get to the summer and the midnight sun, which I’m also really looking forward to. 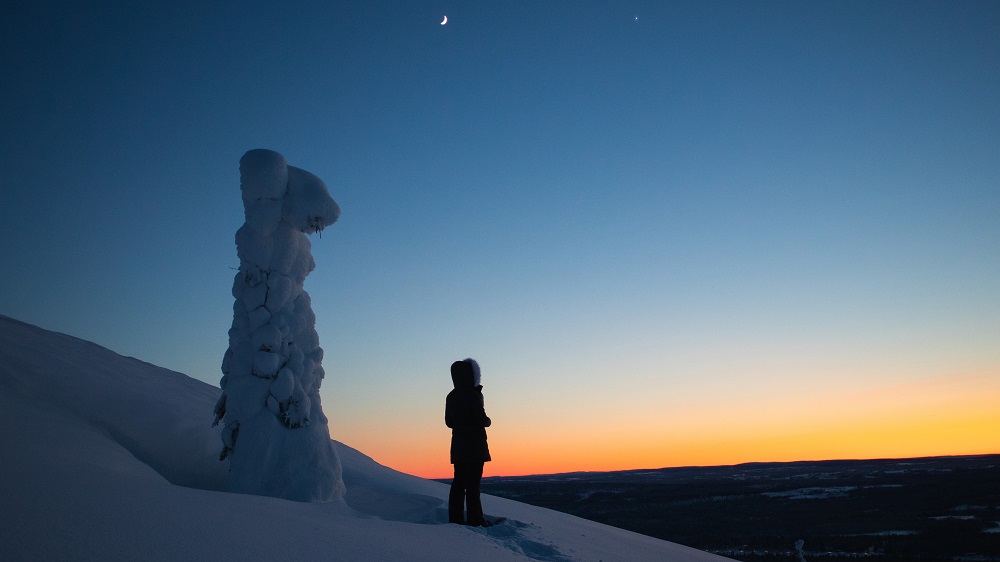 If you’ve ever dreamed of Lapland…

…then go for it! To the people who are thinking about visiting Lapland I’d say that you should come here more than once, different times of the year. Lapland is so much more than just a winter wonderland. But most of all, I wrote this text to anyone who’s ever thought about moving to Lapland, for a few months, for a year, or for a lifetime. If you love nature, you’ll like it here and fit in well. All the better if you like foraging for berries, fishing, hunting, skiing or driving a snowmobile, and by the way, those are also good topics to start a chat with locals! You might get some amused smiles at first if you stop your car in the middle of the road to take pictures of reindeer, but people in Lapland are generally very friendly and happy to get some new faces here. 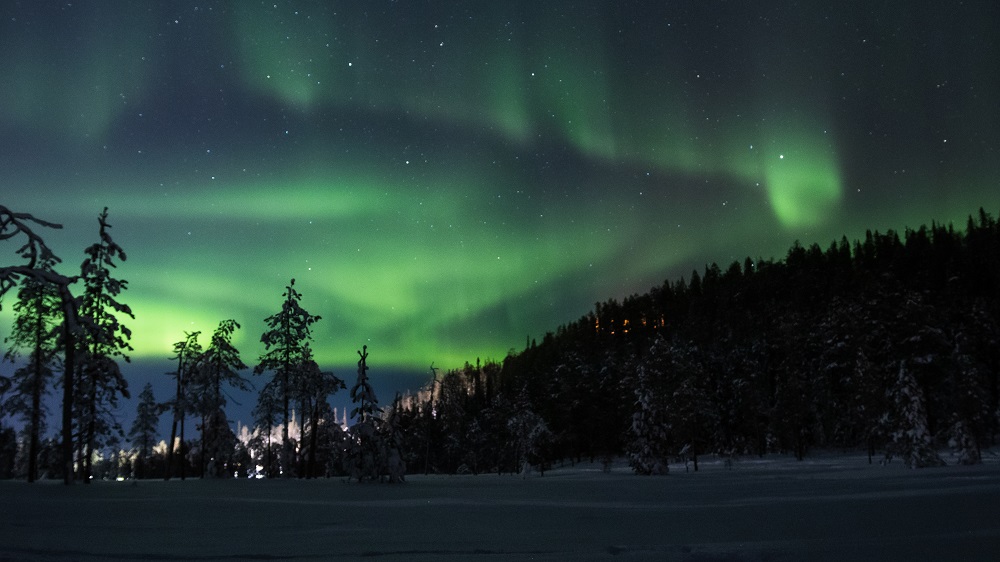 Moving to Lapland was a jump into the unknown, but luckily I ended up jumping into some kind of a fairy tale land. Or at least that’s how I sometimes feel like. It has been a wonderful, beautiful and exciting adventure so far, and there has not been a day that I would have regretted coming here.